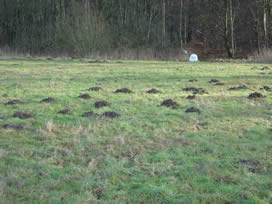 Gopher diets consist of strictly vegetation.  These mammals are herbivores, eating only plants and staying far away from animal products all together.   While this makes the beetles breathe a little easier, this does not bode well for your garden and landscaping!  They eat their food in one (1) of three (3) ways:

As an herbivore, pocket gophers like a large array of vegetation. Just like you and I, however, they have their favorites.  One of their preferred delicacies is alfalfa, followed by the dandelion.  By and large, this mammal will eat most non-woody plants, shrubs, and trees.  In your yard and garden this could mean the sudden disappearance of your carefully tended vegetable garden including beans, lettuces, etc.

Gophers have a two (2) physical attributes that assist them greatly in their dietary preferences.  These include their teeth and cheek pouches.  All rodents, including the pocket gopher, have continuously growing incisors.  While this little mammal prefers the herbaceous varieties of plants, as described above they occasionally partake in woody shrubs and trees making their big front teeth an important attribute to the animal’s diet.

Perhaps the greatest physical attribute of the mammal with respect to the gopher’s diet may well be their cheek pouches.  These little beauties are exclusively used to carry food.  Beginning on the face and extending back to shoulders the cheek pouches of the pocket gopher open on the outside and not on the inside of the animals mouth.  The gopher can turn the pouches completely inside out for cleaning after which a muscle, specific to this purpose, pulls the pouch closed again.

As established earlier, the pocket gophers do not hibernate.  As a result, feeding in the winter time will sometimes lead to more emphasis on above ground, woody vegetation.  In areas of the animal’s range that include snowy habitats the gopher has been known to feed on bark several feet up.  This is because they will very instinctively burrow through the snow.

During the growing season gophers will eat more above ground portions of the vegetation they pull through the soil with roots making up the majority of winter dinners along with tree and shrub bark.

Gopher Diet-Benefits and Detriments to Humans and the Ecosystem

Detriments of the pocket gopher’s diet are varied.  Their effect on alfalfa plantings includes a loss of total productivity and has been estimated to be between 20% and 50%. The mounds left at the entrances of burrow holes have been attributed to dulling and even damaging harvesting tools.

On the smaller scale of backyards and garden areas, gophers can devastate vegetable gardens in a short amount of time.  Young trees and shrubs may also have a difficult time surviving the constant denuding of their lower bark from the winter feeding of a pocket gopher.

Gopher Habitat Gopher habitat is limited to the western hemisphere, however, they can be found in a variety of habitats in North and Central America including pastures, prairies, grasslands, and perhaps your yard.

The specific range of the gopher is, as indicated earlier, limited to the western hemisphere of the earth and does not extend into South America. Pocket gophers can be found from Panama in Central America northward to Alberta in Canada with all but one (1) species, the southeastern Pocket Gopher.  These animals are found only in the western 2/3rds of the United States. Closer to home the range of individual gophers while varying a tiny bit, depending on specific species is a few acres.

Pocket Gophers climate restrictions vary from species to species. You will find the animals from the low coastal regions in California to elevations as high as 12,000 feet above sea level in the Rocky Mountain region of the US and Canada. This extensive climate tolerance is most likely due to the fact that the animal spends most of its life in a climate controlled environment under the surface of the earth!

This little mammal spends the majority of its time under the ground in burrow holes that are custom built for them. The burrows can range from four (4) to eighteen (18) inches below the soil surface and are normally two (2) to three and one-half (3 ½) inches in diameter. Larger gophers may present with larger holes. Burrows can vary from one (1) main tunnel with two (2) to three (3) extensions to, in some cases, a hundred or more lateral tunnels with many, many extensions; it is all a matter of preference!

Each main burrow tunnel ends with a soil plug on the surface, this is called a mound. These mounds are created as the gopher moves dirt from the earth during construction. In the winter time these mounds will also contain snow.

Pocket gopher habitat is defined mainly upon the soil conditions of the general area. With 25 species of gopher there are many different soil types preferred, and, as a result, local populations of gophers are normally specific to one (1) particular species. Generally, sandy soil is always preferable to burrowing mammals, with clay soils being the least preferable.

Soil depth, however, is very important to this little mammal. Experts have determined that soils that are less than four (4) inches are not suitable for pocket gophers. It is theorized that in the winter months shallow soils do not provide enough insulation and become colder than deeper soils, conversely, in the heat of the summer shallow soils absorb too much heat.

Rocky soils may deter pocket gophers as well. While they will work around rocks that are one (1) inch or less in size, larger rocks will be pushed out of the way. You will be hard pressed to find pocket gophers in areas where rocks make up ten (10) percent or more of the soil structure.

Because of the great many different species of pocket gopher it is amazing to see that the types of the differences a small between types of Pocket Gopher Habitat.

Gopher Benefits & Detriments to Humans and the Ecosystem

Gophers benefit humans and ecosystems in several ways. As with all burrowing animals, gophers are doing wonderful things for the top soil in the areas where they live.  The burrowing process aerates the soil, reduces compaction, and increases water filtration.  Living underground has is benefits, too, by adding nutrients to soil through natural composting of nesting materials and, believe it or not, regular excrement.

Unfortunately, those large incisors can have a negative effect to humans when they accidentally chop through plastic water lines and underground sprinkler system.  The mounds formed during the burrowing process have been known to dull the blades of harvesting equipment and may not be fully appreciated by the homeowner who prides themselves on a pristine lawn and garden.

The presence of gophers can also make the area more preferable for badgers which can cause considerable damage to yards and gardens.

Pocket Gophers prefer to spend the majority of their time underground. This makes it hard for some to believe that Gophers are not primarily nocturnal animals.  They have been known to be active at all times of the day.

As with many rodents, pocket gophers do not hibernate.  They forage year round and do store food in their burrows for winter use in colder climates.

Pocket Gophers are solitary animals.  In fact, with the exception of a mother with babies, it would be a rare occurrence to find two (2) gophers living together in the same burrow.

Because there are so many species of gopher their reproduction habits vary. In general, most species mate two (2) times per year, with some varieties breeding throughout the year. Gestational periods last 18-19 days with number of offspring ranging from three (3) to four (4) at one birth. Babies are born with not only their eyes closed, but their ears and cheek pockets, too!

Gopher's physical appearance resembles that of many rodents.  They have a very fine and variable colored fur which can range from gray to white.  This fine fur is a tool to keep the dirt from getting into and clumping the fur.  At a length of about 5-14 inches the animal falls in the medium range for a rodent.

Pocket Gophers are true underground dwellers having certain physical characteristics that make life easier for these types of creatures. Gopher's have very powerful front leg quarters to assist in the digging process and very long, very large front claws and teeth.  A short, barely discernable neck, and their small flat head both help with the digging process by keep the animals head low with those front teeth and legs do the hard work of digging. They have relatively small eyes and ears which provide less surface area to get dirt in thereby keeping irritation low; however, these mammals are a little deficient when it comes to eyesight and hearing capabilities because of it.  To make up for the poor eyesight and hearing they have highly sensitive whiskers on their face to help feel their way through the dark tunnels.

A very interesting physical feature of this little mammal is its ability to close its lips behind their very large incisors.  Most experts agree that this characteristic keeps all of that dirt from getting into the animals mouth while still having use of those large incisors to help with the digging!

But perhaps the most well known gopher characteristic is their cheek pouches, aka, "pockets".  These versatile little wonders make easy work of food gathering due to their amazing ability to turn completely inside out!

The official name of this mammal is "Pocket Gopher", named after their very visible cheek pockets used to carry food. Gophers live most of their lives underground.  There are 35 species of gophers living in both North and Central America. With a 12 year life span gophers out live quite a few of their neighboring wild animals.  This is most likely due to their underground lifestyle. They rarely leave their burrows.

Gophers in your yard and gardens would be a rare sight, but having them in your yard is quite common throughout the United States and parts of Canada and Central America.  They find tender perennials irresistible and with a habit of pulling them from their underground tunnels below the soil surface, the case of the missing begonia plant can sometimes remain unresolved for days!