Evidence of chipmunks in your yard or garden may be as simple as watching them run through your yard or listening to them "chip, chip, chip" at you if you've gotten too close. Other signs are available to let you know if chipmunk intrusion is occurring and can alert you to the presence of these cute little ground creatures. The following list shows several different methods you can use to determine if chipmunks have chosen your yard or gardens as their home.

Evidence of chipmunks in your yard and garden could include burrow holes.  Chipmunks tend to burrow under patios, driveways, stairs, retention walls, or foundations causing problems with stability. Despite the fact that the burrows can be quite extensive on the inside, they can be hard to spot on the outside.  Burrow openings themselves are small, only about two (2) inches in diameter, and the chipmunks do not leave piles of dirt nearby.  They actually carry the dirt away in their cheek pouches as they build to keep the holes inconspicuous. They are also careful to construct entrance holes near rocks or tree stumps and cover them up with foliage.  In the winter, during hibernation, chipmunks will plug the holes with dirt and stones.

Chipmunks love seeds!  If you have a bird feeder keep an eye out for chipmunks feasting on the seed as well as birds.  They will not be able to resist the temptation of bird feeders in the yard.

Chipmunk scat is a round pellet type excrement can vary from 1/4 inch to 1/2 inch in size and found in very small piles of 4 -6.

Chipmunks are "bounding" animals.  They spring forward then release allowing for all four (4) feet to land in the same area and repeat,which according to experts, leaves cluster prints in separated groups. Chipmunk prints may sometimes show claw marks and sometimes do not. Their front feet are approximately 1/2 inch wide with their back feet slightly larger. 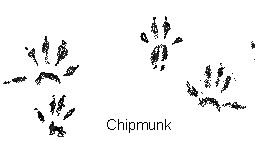 Chipmunks may not be eating your plants, but in they may be living underneath them and in the process of building their den may uproot some of your prized foliage.  If you see several shallow rooted plants uprooted in a row, it could indicate a chipmunk has come to stay.Chipmunk Evidence of Intrusion-Uprooted Plants

Chipmunks have been known to visit the vegetable and fruit garden and sample watermelons once in a while.  Look for small gnawing marks made by their long, sharp incisors.

As you can see, there are several ways to determine if you have evidence of chipmunk intrusion.