Mouse habitat is one of the most varied of all animals on earth. While field mouse habitat is more limited, house mice are called commensal animals. This means they can live anywhere humans live including structures such as homes, sheds, barns. Indeed the house mouse lives in more common mammal areas in the wild including fields and forests, but they are never too far from manmade structures to which they will retreat once the weather turns cooler. It is this dependence on human structures and their ability to enter these structures that allow for the house mouse to live in most every habitat on earth.

Overall mice are found in deserts and tundras; forests and cities. House mice habitats include swamps and meadows; mountainous regions and in the mine shafts hundreds of feet below the surface of the planet!

The overall range of the house mouse habitat is as extensive as range of humans. They occupy every continent on earth exclusive of Antarctica. On the home front, however, the animals will stick fairly close to their home habitat. It would be rare to find a mouse that travels more than fifty (50) feet from their nesting site. 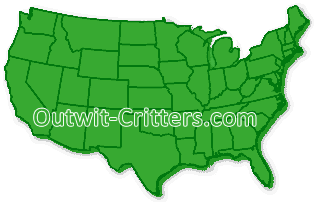 The house mouse nesting sites vary based on location. While they prefer human structures to make their nests in, in many cases they will live out of doors during the warmer months.

Nesting habitat in the outdoors is most always near to the ground. Mice may burrow into the ground to create a nest or take up residency in the cracks in walls and large rocks. The burrows could include a network of tunnels. This network will have separate “rooms” for nesting and storing food. To keep from being ambushed, these smart little mammals will make several exits for a quick escape if needed.

The nests themselves will be made out shredded leaves, paper, and other soft materials. The nests are commonly rounded and range from four (4) to six (6) inches in diameter.

When they decide to share your home with you they will make their nests in rafters, stored clothing or artificial holiday trees. The nests will be the same size as the outdoor nests and consist of any soft materials they can get their paws on including insulation and old clothing.

Field mice will make their nests in hollow logs and stumps or woodpecker holes. Their nests are same size as the house mouse and made of softer materials including fur, feathers, leaves and grasses. As with the house mice, field mice shred the material to be used in their nests.

While the range of the field mouse is limited, it is pretty clear that house mice can live anywhere humans live. In fact, it is this near dependence of the mammal on humans that has made the whole of the world perfect house Mice Habitat.