Mole habitat varies based on species. For instance the Eastern Mole chooses many types of habitats including woodlands, pastures and meadows. Whereas the Star-Nosed Moles like their areas to be a little moister and prefer wet meadows, marshes and peat bogs. Along this same vein, Star-Nosed Moles are often found living along the banks of ponds and streams.

Hairy-Tailed Moles are more at home in edge habitats and meadows and in lower elevations; with the American Shrew Moles more apt to be found in the temperate forests of the American northwest. Townsend’s Moles are often living near river flood plains as well as forests, hayfields, and pastures. And, unlike what their name may conjure, Coast Moles prefer drier areas.

Moles are found through the United States and southern portions of Canada. The table below illustrates the more exact ranges of the seven (7) species known to live in North America.
Mole Habitat-NestsHome ranges for moles of all species will be similar. Because of their appetite requirements they must travel large areas to get enough food which leads to very large home ranges. The home ranges of moles can be as large as two (2) to three (3) acres.

No matter what species of mole you may have in your area all moles will opt to have their home burrows in drier areas, while their feeding, surface tunnels may be in wetter portions of their home range habitat. In more populated areas you will find their den sites under trees, sidewalks and buildings. Nests are located in a cavity underground off of one (1) of the main transportation tunnels. Home Sweet Home for the moles will most likely be in a dry spot anywhere from five (5) to twenty (20) inches below ground.

The nest themselves will have a soft matte of vegetation that is woven together to form a compact shell that measures, on average, about two (2) inches thick. After babies are born mom will often add green vegetation to the nest which, while it decays, will generate heat which keeps the babies warm when mom is out getting food. 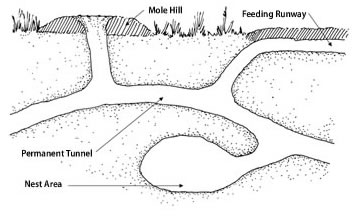 Mole habitat is very dependent on soil structure as one might expect from an animal that spends nearly all of its time in the dirt! Soil preferences do vary between the species. Coast Moles are more often found in areas with drier, well drained and sandy soils. American Shrew Moles prefer moist, soft and deep soils. Townsend’s moles are not happy in sandy soils at all, but spend their time in loamy soils. Hairy-Tailed Moles like light and well drained soils. Finally, the Eastern Mole can tolerate both dry and wetter soils but will not make their homes in rocky or clay soils.

From the southern reaches of Nova Scotia to the arid parts of Texas, much of North America provides excellent mole habitat.