Rabbit habitat extends throughout much of the world and the North American continent. Some prefer arid regions of the desert southwest, the swampy areas of the lowlands in the southeast, the high mountain hardwood forests of the Rocky Mountains and Appalachians not to mention the edge habitats the line many of our suburban neighborhoods. 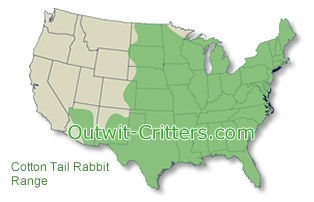 The range table below illustrates the range of many of the rabbits and jackrabbits (hares) found throughout the US, Canada and Mexico.

Often confused with underground nesting rabbits in Europe, the rabbits found in North America are ground nesters. The scientific name for a rabbit nest is “form”. These forms are most often simply a depression in the ground. These nests are normally lined with fur. Cottontails will make a nest for their young only few days before giving birth.

Adult rabbits will normally sleep under tall, thick brush or occasionally take advantage of an empty underground burrow made by another animal.

From the mountains of the western states to the marshy lowlands of south central US the climate and forest cover of the North American continent make up excellent rabbit habitat.