Rat habitat is closely related to human habitats. They can live anywhere we do. In general rats, Norway and Roof, moved over to the United States with the early settlers of the nation. In fact, Norway rats are often referred to as ship rats aptly named for the type of transport that brought them to the US. They are common to most parts of the North American Continent. 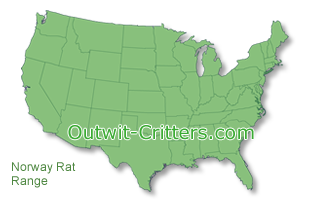 Norway rats will be happy to live most anywhere humans do. This includes barns and houses and along riverbanks and streams.

Roof rats are happier higher up and often take up residence in attics and treetops including, much to a grower’s dismay, citrus fields.

The range of each variety varies slightly with the Norway rat occurring in the 48 contiguous states of the United States. It is happiest living at lower elevations of the North American continent, but can be located anywhere humans are. Roof rats, on the other hand are more often than not found in the lower half of the eastern coast of the US through the Gulf States and into Arkansas. You can also find them along the Pacific coast of the United States and Canada as well as the Hawaiian Islands.

Home ranges are based on food availability. Rats may live in one area and feed in another. The maximum home range recorded by researchers is about 300 feet from their homestead to the animal’s food source.

Nests of the rat habitats depend on variety of species. Norway rats are burrowers, building their nests underground or at ground level. The diagram below illustrates an underground Norway Rat nest.

Roof Rat nests will be similar to Norway Rats however they will not be at or below ground level. Roof Rats will nest in trees and bushes and attics above ground. Roof rats can be found homesteading in trees and shrubs, attics and upper floors of buildings.

Look for rat nests outside under woodpiles, bushes, vines and tall grasses. Underneath rocks, in cars, in building insulation and near furnaces in basements are also locations where rat nests may be located. They are especially fond of locations near electrical wires where they can travel unencumbered.

The habitat range of the rats is more limited for the Roof Rats whereas the Norway’s are spread throughout the United States. Much like other rodents the habitats that are most utilized by humans remain the best locations for rat habitat.