Squirrel Habitat in the US and Canada is in mainly in forested regions, however, the animals live in a variety of habitats worldwide ranging from tropical rain forests to the arctic tundra of Alaska.

Squirrels exist on all but one (1) continent on earth, Australia. The table below illustrates the squirrels most common to North America and their specific squirrel habitat range. 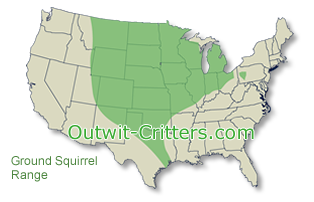 Home ranges of the species vary from 200 yards for the Red Squirrel to seven (7) acres for gray squirrels to being dependent on food availability for the Aberts Squirrels of the southwest.

Squirrel nests for are used for shelter and raising young. Most habitat nesting sites include hollow trees or stumps. Nests are kept quite homey and lined carefully with shredded bark, leaves and mosses. Nest locations will vary slightly from species to species.

Most Squirrels will occupy two (2) types of homes, a drey and a den. The dreys are less permanent nests used in the summer and winter which are normally located in the crotch of trees 30-45 feet above the ground. Winter dreys are sturdier than the summer dreys, are lower in the trees, and more water resistant. It is not uncommon to find man made materials used in the winter dreys. Dens are inside of tree cavities and crevices and normally used in the winter as a sturdier alternative to a drey. The nests occasionally have a second entrance hole that serves as more of an escape route than an entrance. Nests will house groups of 2- 10 in the winter time.

Red squirrels will occasionally nest underground much like the ground squirrels by building multi chambered tunnels under rotting logs; however this type of habitat nesting is rare according to experts.

From the forests of the highest peaks in the Rocky Mountains to the prairies of northern Mexico, the North American continent provides excellent squirrel habitat.