Squirrel evidence of intrusion may be as simple as witnessing the creatures in your yard or gardens. However, this may not be the case and with so many animals willing to partake in the bounty that is your yard it may be difficult to determine who is eating, damaging or has moved in. Try these tips below to establish if the tree, pine or flying squirrel is intruding in your yard.

Squirrels can’t resist the temptations brought on by a freshly filled bird feeder. If you don’t catch them red handed with their paw in the cookie jar than look for claw and bite marks near the feeder holes.

A not-so-fun way to determine if a squirrel has been visiting your yard and gardens is if they have left a little excrement, or scat behind. Squirrel Scat will oblong in shape and relatively small in size. In areas with tree squirrels such as fox and gray look for small pellets less than ½ inch; even smaller for the flying and red squirrels.

Despite the fact that squirrels are mostly arboreal (hang around in the tree tops) they do spend a fair amount of time on the ground. How else would they get to your best petunia flowers? Squirrel tracks, as with any animal, will be most easily found in soft soil, sandy areas or in snow. Look for narrow rear tracks with five (5) toes accompanied by the front track with only four (4) toes. The hind feet will land ahead of the front feet in groups of four (4) such as in the image of an Eastern Gray Squirrel below. 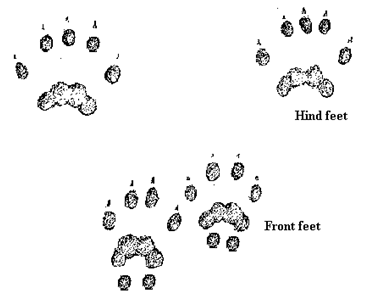 If your nestlings or eggs are disappearing from your bird houses without much disturbance to the nest itself it could be a very hungry squirrel. Look for claw or bite marks near the entrance holes.

Squirrels do not partake in the hard outer covering of the acorns and nuts they find in your yard. Look for broken pieces of acorns and walnut shells with the meaty nuts mysteriously missing.

Squirrel Evidence of Intrusion-Noises in the Attic

One of these most detrimental behaviors of a squirrel and perhaps any animal is when they choose to rent out space in your attic without talking it over with you first! One of the best forms of evidence is the sound of these busy little creatures running around above your head. Listen for squirrels intruding in your home in the early morning hours or in the evening hours.

Squirrels are quite obvious and are only occasionally secretive. This behavior lends to the more obvious signs or squirrel evidence of intrusion.