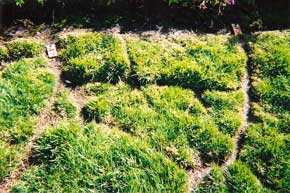 Voles are quite content going about their business by sunshine or moonlight. Voles do not hibernate, but the seasons do play a role in the time of day chosen for activity. In the warmer weather they may favor the nighttime and, conversely, they will be more active during the day during the winter season.

The method by which the vole travels during its daily or nightly business is through a system of surface runways.

These interstates are usually about one and one-half (1 ½) inches wide. In the snow these lanes are almost invisible to predators and they can travel unnoticed and without fear. The majority of their day is spent traversing through these runways. Voles will typically make 15 to 20 trips along them. They are covered by snow in winter and vegetation in the summer. This is why voles are rarely seen. Voles normally make their homes underground, but may choose to hang their hat under a flower pot or a rock wall.

Family life is quite interesting for the vole species. They are quite the prolific bunch! Voles can reproduce year long but prefer to mate in the spring and fall. Females gestate for about 21 days giving birth to anywhere between one (1) and twelve (12) young. Voles can give birth up to 12 litters in one (1) year! To add fuel to this reproductive firestorm, female voles are physically ready to reproduce at the tender age of three (3) weeks old. That said, the reason we are not totally overrun with voles can be attributed, in part, to the fact that nearly 90% of the young die during their first week of life. Their lifespan is quite limited and voles normally survive to only one and a half (1 ½) years old. Vole populations are cyclic depending on the environment and climate conditions. In North America vole populations will peak every four (4) years according to experts which can lead to population densities as high as 250 per acre.

Watch out for those expectant mothers, they are very territorial and are considered one of nature’s best scrappers, too! Before things get too rough, although, they do try to scare potential predators away first by stamping their hind feet or squealing.